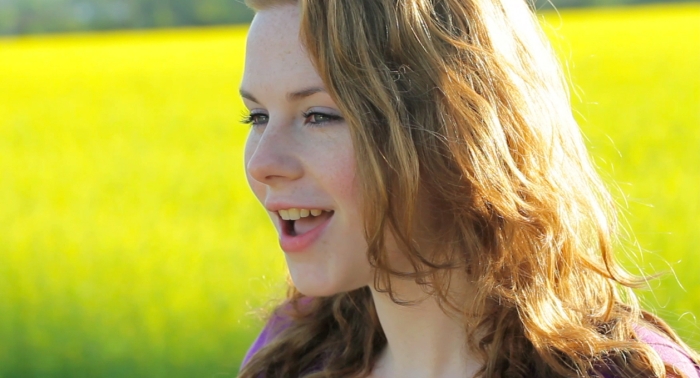 Well what can I say? Well firstly, Manuel, thank you for doing this video was so much fun, and giving me the opportunity to work with you, allowing me to learn more about how it’s all done!

So I am Roseanna Brown, a singer, songwriter, teacher and actress (I like to think). I have always had a passion for music since I can remember so I want to be able to do everything that I can in it. I love writing music not just for myself but other artists; it’s just too much fun to even explain. I teach piano and singing and love every single moment of it. I also act and do film work, more recently and over the past few years I have been in the Harry Potter films; it’s such a great experience and I think helped me to be able to perform in front of a camera (which is harder to do than it looks).

I met Manuel de Teffé firstly in Rome when I was about 13, when he was working with my father on a music video for a boy band called Wot Nxt. I’ve changed a lot since then but the passion for music just grew stronger, so when he asked me to do a video I jumped to the opportunity.  I’m an excitable, bubbly person who always loves to laugh so you can imagine how much laughing and joking around went on, but I still worked hard, I promise. At the same time I had teaching and I was doing a performance of Carmen Jones, and Harry Potter filming, but somewhere in there, there was more than enough to do this too, I wasn’t going to let it pass me!

It’s very different to working on set at Harry Potter. On set there are over 100 people at a time smaller depending on the scene you are doing and there is a lot more waiting around and checks. It’s a great laugh chatting and getting to know the cast and crew too. They are very precise with what they want from us to the point where we did a wand camp so we knew exactly how to fight with spells and the moves you use with them, attacking and blocking. I have made some of my best friends there and will always keep them close to me.

Manuel told me one day ‘we need to get you a boyfriend’ at the time I was a little confused, so I rang up my actual boyfriend asking if he knew anyone to replace him for a few days to be in the video, but I had already thought of Sam to do it. I have worked with him in many shows so I knew we would have a good connection and be able to work together and he would also be professional enough with the time frame we had to get everything we had to do. Hey presto! We did it.

I wanted to make sure that in the video there was a sense of knowing that the past is the past and the future always holds something new and amazing that you don’t expect, that things that have always been there for you, like your family, will never go away and hold you close no matter the mistakes you make. I found this almost a challenge, trying to completely bring across what I wanted from the song to the video and I hope that I did it justice. It’s the most fun yet hard work I have done, and well worth it.

It all wouldn’t have been possible if it wasn’t for Manuel though. Having to work and put up with me with all my jokes, but he truly made the video to what it is, helping me to get into the song more to try and bring across it’s messages.  I have to Thank you Manuel for thinking of me for this and for putting up with me for the weeks we did this. It looks great!!! I cannot thank you enough.  I hope you all like it too!