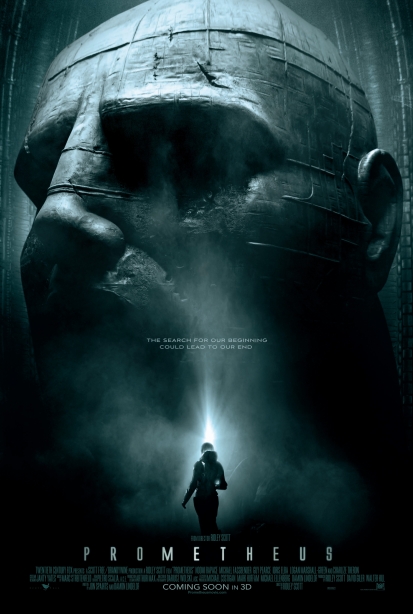 Prometheus revolves around 5 basic questions:  Who created us? What is our purpose? Is there a God? Did Ridley Scott really direct this movie?  No, seriously?

From great directors come great movies and  luckily enough when they miserably fail, they  fail leaving behind memorable lessons. Such is the case of Mr. Scott’s latest work.  Now, instead of thanking Mr. Ridley for his upteenth masterpiece, I’m striving to be grateful to him for another reason: the man misteriously managed to put together a handy  timeless manual on why a movie fails. It’s all here, clumsily compressed in two hours of majestic nonsense.

33 years from “Alien” the masterpiece (1979), the brilliant director delivers an alienated  prequel that is light-years distant from its predecessor, in style, narrative, cast, special effects. A cinematic effort that not only lacks the original movie’s DNA ignoring a visual legacy  the audience craves for, but whose narrative drive  is almost not existent.

The truth is that the more ideas you try to pack into a a movie, the more they implode upon themselves until the movie collapses into dull unbearable notions.

Let me go randomly through the main points that most disappointed me.

3D must be premeditated. If you want to make a 3D movie you have to choreograph  action and narration along 3 dimensions: foreground, middle ground, background. Something has to constantly happen in one of these 3 fields, following a certain rythm and pattern. If the foreground is ignored, such as in in the case of Prometheus, it’s “just”a regular movie with a vague sense of depth.  As a matter of fact,  a 3D movie is not only made by 3D cameras, for it must be perfectly thought out in 3D from the outset. This requires a special effort: during the writing process itself or immediately afterwards, writer, director and producer  must wisely overlap each scene with a 3D choreography. Sadly, in Prometheus, apart from the 3D opening sequence, the rest is “as idle as a painted ship upon a painted ocean”, as Samuel Taylor would note.  And when the Alien we know finally appears at the end of the movie, when the familiar monster we all know is about to open its terrible jaws, we hope this is going to happen towards us. We expect it and we long for it, plus there is a legacy to reinforce here. We want it in 3D. Nevertheless, Alien opens its mouth IN PROFILE , trashing forever the promise of a 3D movie. Not even a 3D peekaboo, seriously?  That would have totally paid off.

2) THE PROTAGONISTS NEED A PASSIONATE GOAL

This is what stories are about and this is why we like movies. Let’s have a look at the plot in Prometheus. Brace yourselves.

3) THE PROTAGONIST MUST BE EMPATHETIC

Here’s a casting’s rule of thumb: If you cast a superb actress like Charlize Theron she must automatically become the main female leading character. It’s a no brainer. UNLESS, unless  you find a more charismatic actress as a lead. She does not need to be necessarily a star but she must ooze star quality  in every scene. She should trigger in us an instantaneous suspension of disbelief, otherwise the audience unconsciously keeps  comparing the various performances…and the truth is that actress Noomi Rapace cannot compare neither to Charlize nor to Sigourney.

4) ACTING SHOULD BE CONSISTENT THROUGHOUT THE MOVIE

One of  Ridley’s Scott’s most famous quotes is “Casting is everything”. As it turns out, he dropped the belief during this movie. In fact, Prometheus suffers from a very weird hiccupping “Suspension of disbelief”.  We see Charlize Theron, it’s a movie. We see one of the many miscast stereotyped actors, we wake up. We see Michael Fassbender, it’s a movie. We hear Logan Marshall-Green deliver a line, we get miffed. Now, if the protagonists of a movie are not the most empathetic characters of that movie, we have a problem. Prometheus’ most ironic factor is that the characters we care the most about besides not being the protagonists are the only ones who are really able to act.  For a director like me it was an excruciating experience seeing this bizarre discrepancy in acting throughout 2 hours.

5) EVERY STORY IS A PROMISE

Every story is a promise. Every story.  In Prometheus, the promise of the premise is, as publized in the poster, ” The search for our beginning could lead to our end”.  But this  “beginning” is so lame that, by the same token,  the search for a decent screenplay could also lead to Christopher Nolan or…

Dedicated to the producer who is about to make a 3D movie.